China unveiled some of its most secret and mightiest missiles at the grand parade in Beijing on Tuesday, with experts saying the move was intended to display the prowess of the nation's strategic deterrent. 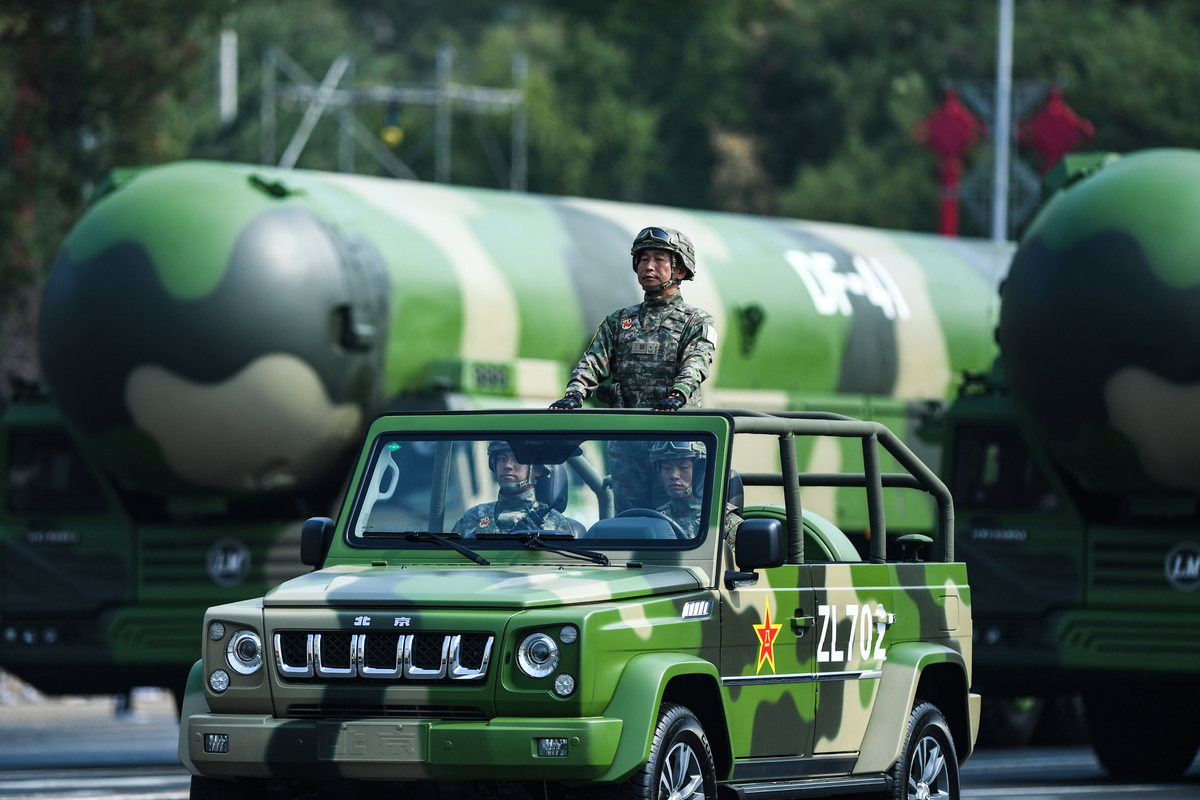 Five of them can carry nuclear warheads, representing an unprecedented disclosure of China's nuclear force. In previous parades no more than four types of nuclear-capable missiles were displayed.

Among the showcased missiles, the DF-41, DF-17 and JL-2 had never been formally shown to the public and their existence had never been officially confirmed by the People's Liberation Army. They had long been the subjects of intense attention or speculation from military analysts and weapons fans around the world.

Carried by a gigantic, 16-wheel launch vehicle, the road-mobile, solid-propellant DF-41 appeared at the end of the strategic strike group moving along Chang'an Avenue, indicating its importance in the Chinese military's arsenal. It was the largest land-based weapon showed at the parade.

Military observers widely consider the DF-41 to be one of the most advanced and lethal weapons on the planet. Only three countries－the United States, Russia and China－possess such destructive hardware, regarded as the ultimate strategic deterrent. Its overseas counterparts are the US's LGM-30G Minuteman III and Russia's RS-24 Yars.

The upgraded DF-31A missile formation is reviewed during the National Day military parade.

According to a brief introduction at the parade, the DF-41 is a land-based, solid-propellant ballistic missile with intercontinental range. Domestically developed and carrying nuclear warheads, it is believed to have been designed and built by the China Academy of Launch Vehicle Technology in Beijing, part of China Aerospace Science and Technology Corp.

PLA Daily, the military's flagship newspaper, previously reported on its WeChat account that the DF-41 can fly at least 12,000 kilometers and be accurate to within 100 meters. It weighs about 60 metric tons and can deliver up to 10 nuclear warheads, according to the report.

The Missile Defense Project at the Washington-based Center for Strategic and International Studies has speculated that the DF-41 has a range of up to 15,000 km, more than any other missile, and is capable of carrying 10 independently targetable nuclear warheads.

"First of all, the DF-41 has a strike range that is longer than any other Chinese missile, covering all of our strategic targets around the world," he said. "This enables us to retaliate against any nation daring to make a nuclear provocation or launch a nuclear attack on us in the first place.

"It carries multiple warheads with strong penetration capability, which makes it very hard to intercept. The weapon's hit accuracy is high enough for nuclear retaliation missions."

Yang said the DF-41 also features good mobility as it can be fired from its roadmobile launch vehicle or a rail launch platform, adding that it can be launched by a small team of operators using just a few pieces of equipment.

"This will make it very difficult for enemies to detect and predict the moves of our DF-41 units," he said.

Yang said the DF-41's flight tests had all been successful, testifying to the reliability of the missile's technology.

He said the missile's appearance at the parade was intended to tell the world that China, as a responsible world power, has the capability and means to safeguard its national security and interests.

A military researcher with knowledge of China's missile programs, who requested anonymity, said the DF-41 incorporates some cutting-edge technologies, such as the latest information-processing measures, noting that it performed better than its foreign counterparts in some key aspects for ballistic missiles.

She also said the large number of DF-41 missiles taking part in the parade indicated that it has entered mass production and China is able to build it quickly if necessary.

With a futuristic aerodynamic design, the DF-17 is able to deliver a conventional warhead for a short-or medium-range precision attack on targets in all weather conditions, according to the PLA.

Each DF-17 unit can independently launch the missile without relying on the support of other facilities, the military announced at the parade, noting the missile would be good at penetrating enemy defense networks.

Information about the weapon was apparently among the most closely guarded secrets of the Chinese armed forces as there was not a single picture of the missile available on the internet before its Tuesday debut, which was notable given the fact that even a handful of DF-41 photos could be found on Chinese weapons websites.

According to earlier reports, the DF-17's biggest advantage over other kinds of ballistic missiles lies in its payload－a hypersonic glide vehicle that observers said can fly above the upper edge of the atmosphere and frequently change direction, resulting in sophisticated trajectories. That is likely to make it extremely difficult for missile defense systems to track and intercept it.

Yang said the DF-17 is a new model of tactical ballistic missile characterized by its ultrafast speed and a maneuverable warhead capable of changing its flight trajectory.

"The missile can pierce through air defense systems at an extremely fast speed and then hit the target accurately," he said. "Moreover, the weapon system promises a high level of flexibility and rapidity when it is fielded and used.

"Considering the sophisticated circumstances along China's borders, its deployment enables us to respond to possible emergency situations in neighboring regions. It is more useful than larger, mightier missiles."

Cao Weidong, a senior researcher at the PLA's Naval Research Academy, said the DF-17's astonishing velocity means an enemy would have very little time to respond to the incoming warhead or move the target, which made it an effective option for precision attacks.

Yin Zhuo, a retired PLA Navy researcher, previously told China Central Television that China had leapfrogged the US in the research and development of some hypersonic weapon technologies, and that means a lot when it comes to researching the next generation of strategic weapons and, in a larger context, to national security.

The JL-2 submarine-based international ballistic missile's inclusion in the parade made it the second part of the PLA Navy's nuclear-capable platform to be revealed, 35 years after its predecessor, the JL-1, was unveiled at the Oct 1, 1984, parade in Beijing marking the 35th birthday of New China.

"The combination of land-and sea-based ballistic missiles increases the reliability, survivability and practicability of our strategic nuclear deterrence," he said.

"The British and French militaries now maintain the submarine-launched ballistic missile as their sole nuclear strike platform as they are aware that even though sea-based missiles are less accurate than land-based ones, they are good enough for nuclear retaliation and will deter the enemy," he said.

The JL-1's deterrent capabilities were constrained by its short operational range, but Cui said the JL-2's longer range, better technologies and stronger capacity give the Navy a reliable tool to deliver nuclear warheads.

The military researcher, who asked for anonymity, said a submarine-based missile's range also determines the safety of the nuclear-powered submarine carrying it because short-range launches are riskier than long-range ones.

"The JL-2's extended range will better ensure the safety of the submarine," she said. "Furthermore, its multiwarhead capacity is guarantee of a dependable nuclear counterattack."

In addition to the new ballistic missiles, a new type of cruise missile, the CJ-100, made its maiden public appearance at the parade.

According to the PLA, the CJ-100 has strong penetration capability, high hit accuracy, large coverage and rapid response ability.

The anonymous researcher said the CJ-100 is likely to be supersonic and, in conjunction with subsonic missiles, gives the PLA Rocket Force a diversified portfolio of assault weapons.

The YJ-18 and YJ-18A supersonic anti-ship cruise missiles also made their public debuts at the parade. The YJ-18 series is believed to be a world-class family of anti-ship missiles and the most advanced weapons mounted on the PLA Navy's ships and submarines.